MorningStar's SunSaver Duo is an advanced PWM two battery controller for RV's, caravans, boats and cottages. This product will charge two separate and isolated batteries at the same time based on user selectable priorities. Will also work with one battery.

The SunSaver Duo employs Morningstar's legendary SunSaver controller technology, whose long-term track record for high reliability and improved battery charging is well-recognized in the solar industry. This controller also includes a back-lit remote meter which may be mounted in or on a wall, and displays pictorial and digital status information about the solar power system. The SunSaver Duo is epoxy encapsulated for environmental protection, is user adjustable via DIP switch or connection to a personal computer, and has an optional remote temperature sensor.

If there is only one battery, the SunSaver Duo sends up all 25A to the single battery with no detrimental effects. The second battery can be added at a later time, or not at all. The meter shows dashes for battery 2 when it is not in use. 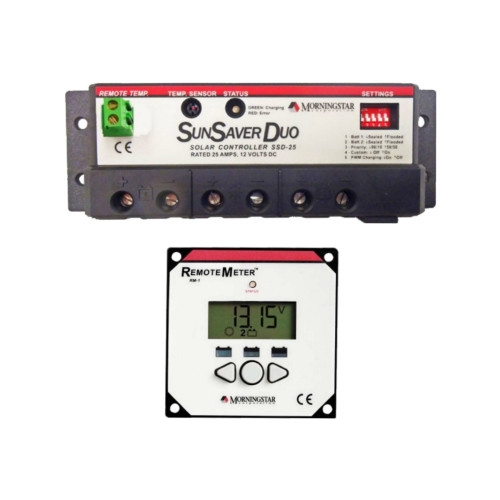